London is full of Lions.

With over 10,000 sculptures  of lions there is bound to be a lion near you. Here are my favourite Lions:

The four lions in Trafalgar Square,  commonly known as the "Landseer Lions" are among the most popular of London´s statues. 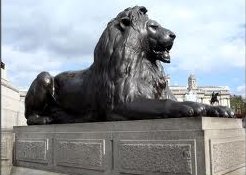 Lion of England at Twickenham

My favourite says Jim. The lion which adorns the gates at Twickenham Rugby Stadium was presented to the Rugby Football Union in its centenary season (1971) and unveiled shortly afterwards. It is a Coade stone lion (like the one at Westminster Bridge) and was given by the former Greater London Council who had acquired it from the old Lion Brewery on the South Bank. It was given a coat of gold leaf in 1991 when England hosted the second Rugby World Cup. 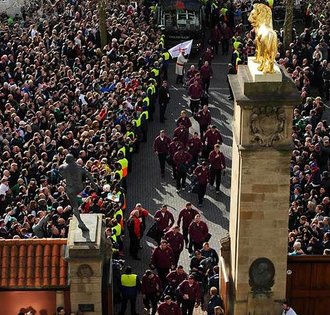 The Lion stands on the South Bank side of Westminster Bridge. It´s a 13-ton Coade stone lion moved here from the Red Lion Brewery - via Waterloo Station. The twin lion at the Brewery ended up at Twickenham - see above. 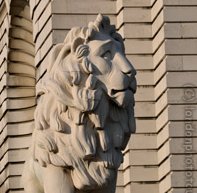 This is my special favourite. The lion sits on top of the West Gate in front of Buckingham Palace holding the Royal Coat of Arms. 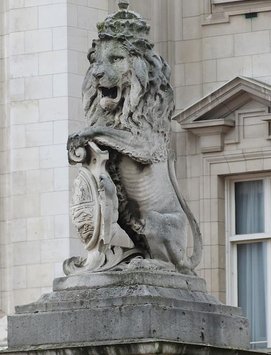 "If the lions drink,

If you peer over the edge of the walk-way on the Victoria Embankment, you will see mooring rings held in the mouth of carved lions. Built in the 1860s as part of the river´s flood warning system. 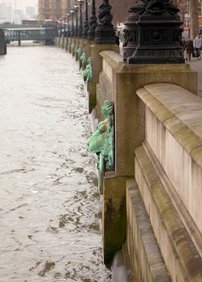 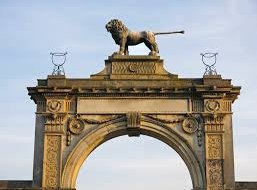 The main attraction of Syon House in Brentford. Percy is 260 years old! 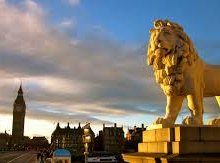 The Queen Victoria memorial stands in front of Buckingham Palace. The statue is surrounded by four massive  lions, each with a monumental figure.  A gift from New Zealand.(Picture below). 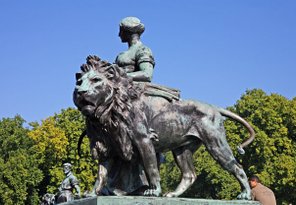 At the base of Queen´s Tower in South Kensington, the only remaining building  of the Imperial Institute. These two stone lions are pair of a set of four. The other two are at the Commonwealth Institute. 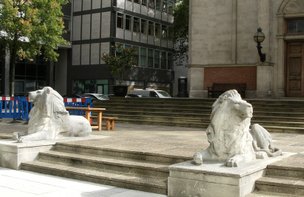 On Gerrard Street in Chinatown, Soho,  you will find two stone lions of good luck. 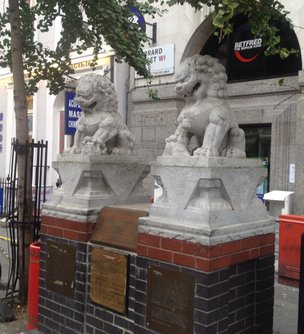 This Lion guarding the northern entrance to the British Museum in Bloomsbury (Montague Place) was made by Sir George Frampton.

Lion sculpture standing in front of the entrance of the HSBC bank in Canary Wharf. 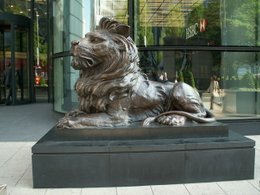 Designed by Alfred Stevens these lions can be found on the railings outside the Law Society´s Hall, Chancery Lane, WC2. 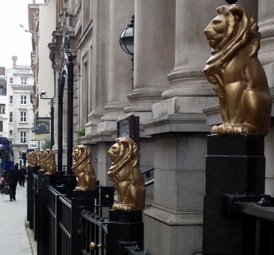 Code stone lion on top of the Lion Gate entrance, Kew Gardens. The only gate in the Southern part of the Gardens.

Cast from bronze and looking towards Parliament Square. You will find this lion guading the statue of Oliver Cromwell outside the House of Commons. 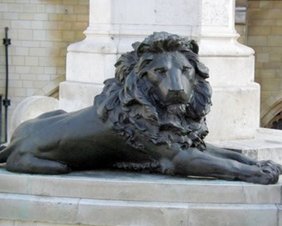